‘Typography means more than bringing order to the passing on of information;
it implies elevating to the sublime the mould in which the process of passing on is cast.’ 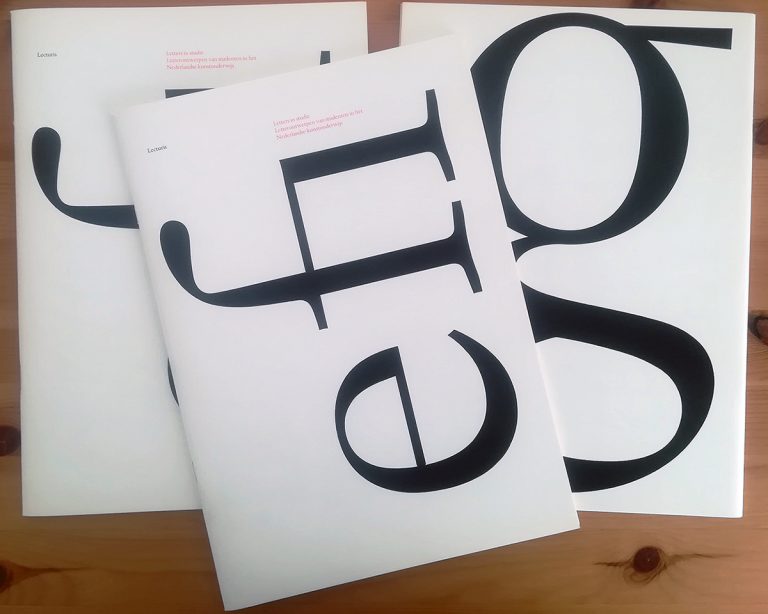 Publication from 1983 with mostly analogue type designs from art-academy students in the Netherlands, collected and introduced by Gerrit Noordzij. The large (original size) letters on the cover were made by Blokland

Frank E. Blokland (Leiden, 1959) studied Graphic and Typographic design at the Royal Academy of Art (KABK) in The Hague from 1978 until 1983. As student of the renowned Gerrit Noordzij, he founded the workgroup Letters], of which many nowadays well-known Dutch type designers became a member. 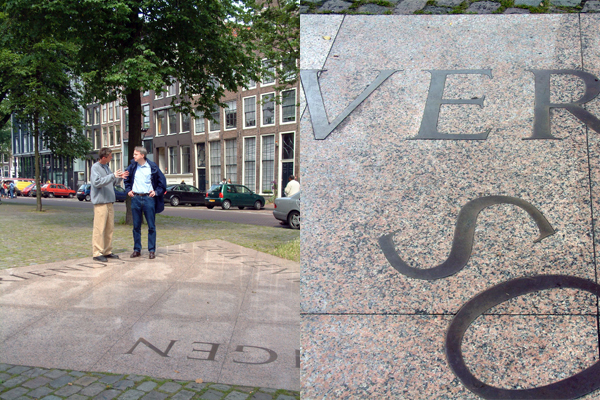 Lettering (Cellini capitals) by Blokland of the Homomonument in Amsterdam (1986)

During the eighties, Blokland designed the letterings of a number of monuments, among which the Homomonument at the Westerkerk in Amsterdam. 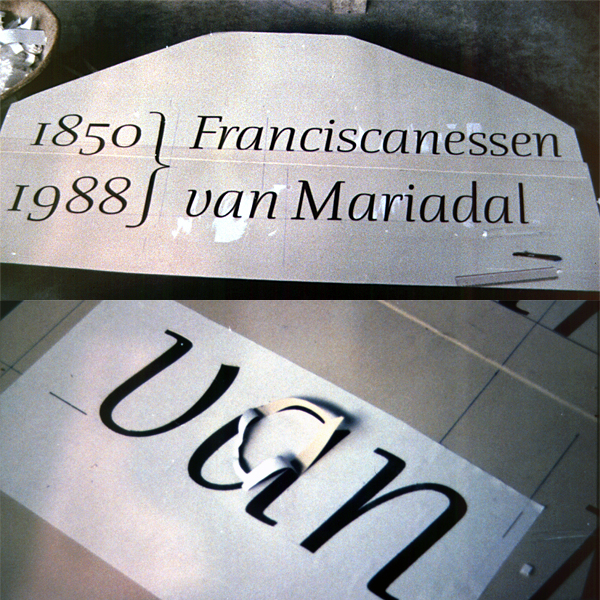 During that period he worked together with the famous sculptor Frans de Wit on a number of monuments for the city of Leiden. 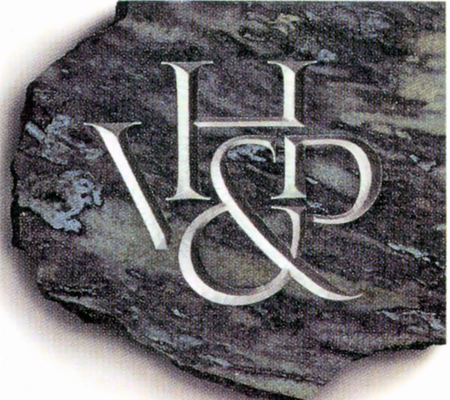 Logo designed and cut in granite by Blokland (around 1990)

Also around that time Blokland started to cut letters in stone. 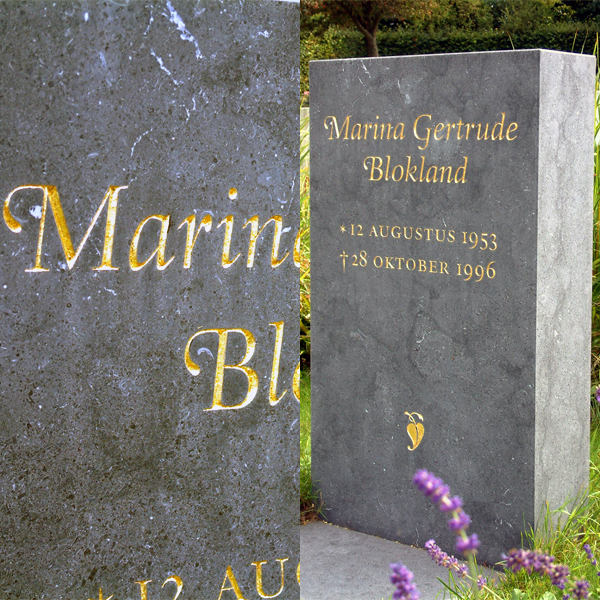 Gravestone designed and cut by Blokland (1996) 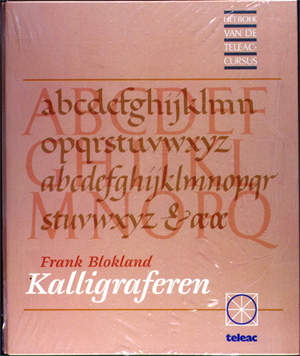 Calligraphy, the art of writing by Blokland

Blokland wrote the book for the television course Calligraphy, the art of writing in 1990; 16.000 copies of this book went over the counter. Further since the 1980s he has written some 150 articles on type design and font production for various graphic and design magazines, like Compres, Pers, PrintBuyer, Hamburger Satzspiegel and Page.

Masthead for magazine by Blokland (around 1990)

Masthead for magazine by Blokland (1993)

Masthead for magazine by Blokland (1994)

During the 1990s Blokland worked closely together with the design agency Hazelhoff de Vaal & partners on a number of logo’s and mastheads. 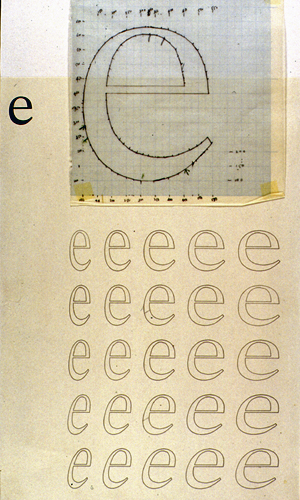 Blokland purchased his ﬁrst computer in 1983: an Acorn Electron. He programmed a simple tool for digitizing vectored letters, and for subsequently interpolating and modifying these. It was baptized ‘DrawMonkey’, which is the direct translation of the Dutch ‘Tekenaap’, i.e., a pantograph. For getting output other than on the screen, one had to be quite inventive to get printers connected, eproms installed, et cetera. Although DrawMonkey in all its simpleness functioned well (see image above), Blokland realized back then that others were better equipped for programming than he was, as he himself was more skilled in designing type. That insight formed the basis for the later cooperation with the programmers at URW(++) in Hamburg, Germany, which eventually resulted in the DTL FontMaster tools.

After years of preparation, in 1990 Blokland founded the Dutch Type Library, the ﬁrst and nowadays largest producer and publisher of digital typefaces in the Netherlands. 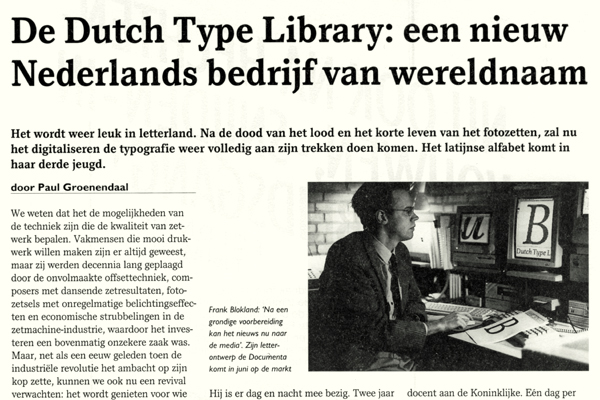 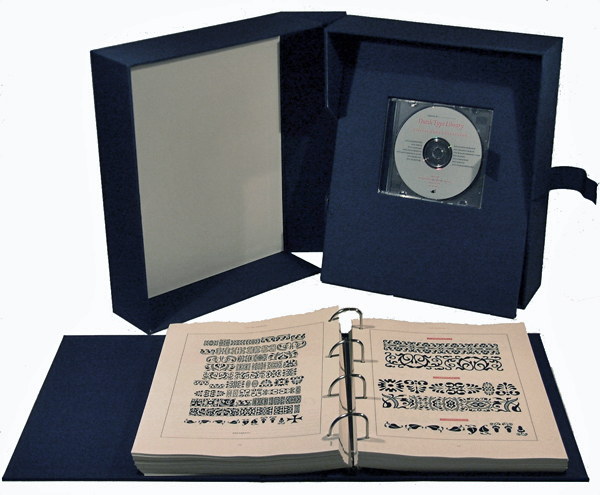 A couple of years later he initiated and supervised the development of DTL FontMaster, a set of utilities for professional font production developed by DTL and the Hamburg, Germany, based company URW++. 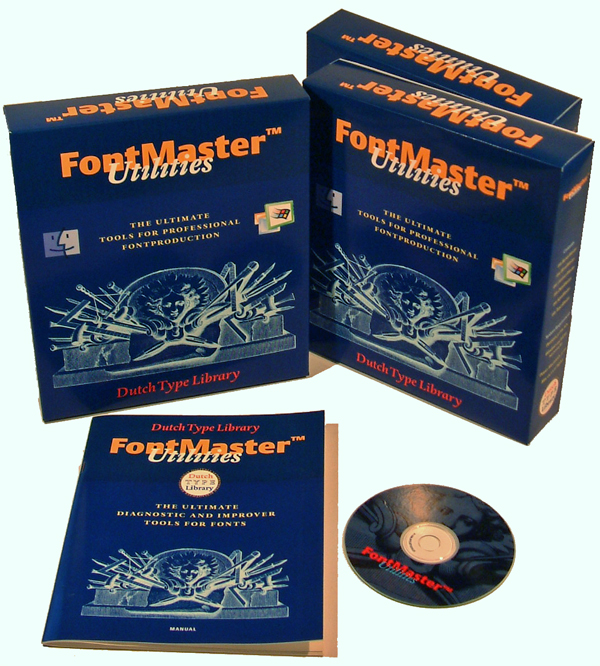 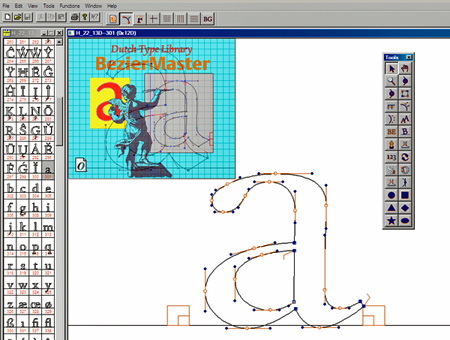 DTL BezierMaster, one of the modules of the DTL FontMaster suite 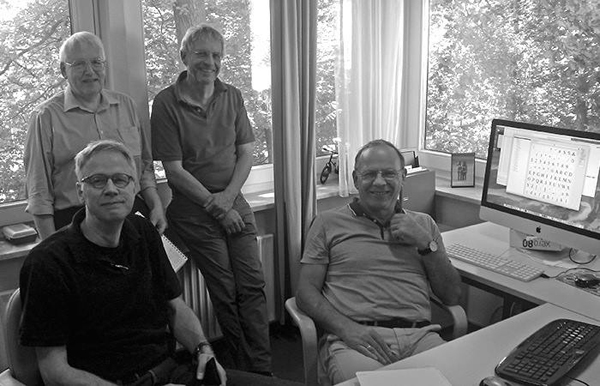 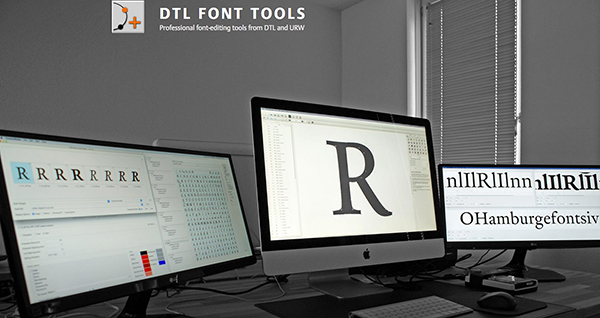 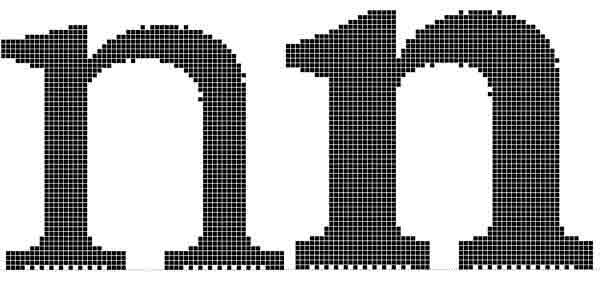 DTL Documenta was the corporate typeface of the Rijksmuseum

For roughly a decade the seriffed and sans versions of DTL Documenta formed the corporate identity typefaces of the famous Rijksmuseum in Amsterdam, the Netherlands. The typeface was used for the signage in- and outside the museum, publications, annual reports, et cetera. 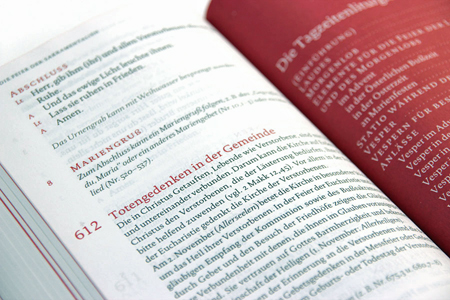 DTL Documenta has been applied in Gotteslob, the new prayer and song book of the Catholic church in Germany and Austria.The production of the 3.6 million copies (1,300 pages each) required eight tons of red ink and roughly 3,000 tons of light-weight paper (40 grams). 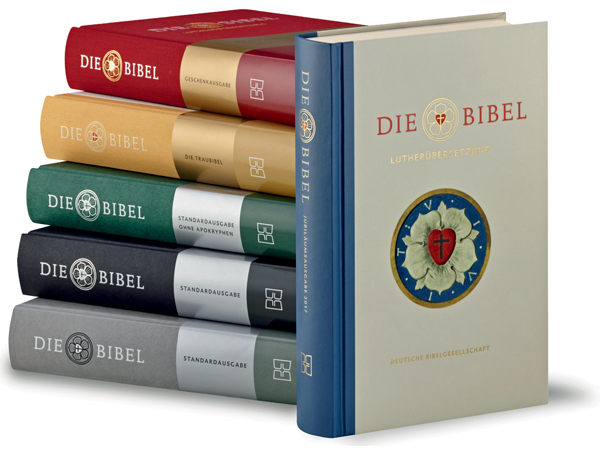 260,000 copies of the Luther Bibel 2017, typeset in DTL Documenta, were printed for the Evangelische Kirche in Germany end of October 2016. 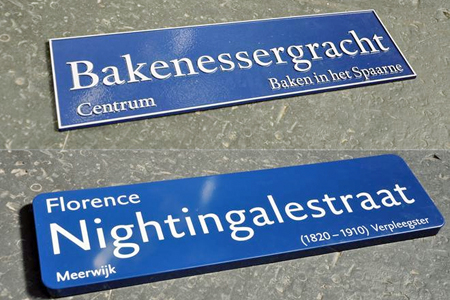 Since 2010 new street signs are placed in the city of Haarlem for which DTL Haarlemmer is used. The design agency Bureau Arjan Karssen selected the seriffed version for the street signs in the historic city centre, and the accompanying sans serif is used on two different signs for the pre- and post World War II parts of the city.

When Gerrit Noordzij retired in 1987 from the Royal Academy of Art (KABK) in The Hague, Blokland was the ﬁrst of the younger generation to succeed him. As Senior Lecturer Blokland now teaches writing, letter drawing, and type design/font production to the graduate and post-graduate courses at the Graphic Design department. 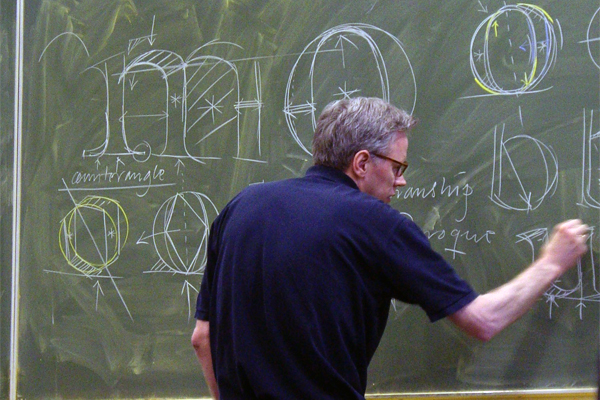 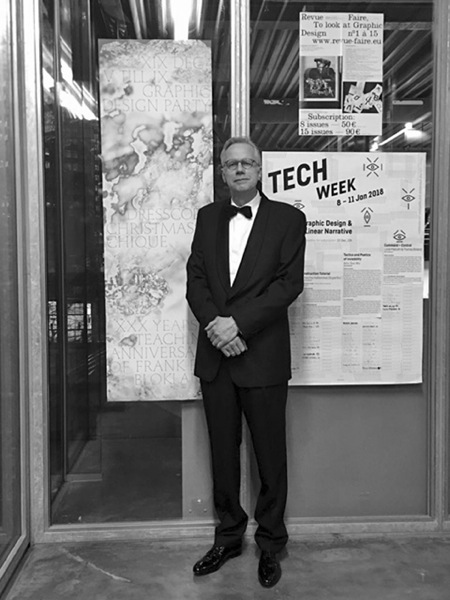 Just before the reception (and in front of the poster announcing it) to celebrate 30 years of lecturing at the KABK’s Graphic Design department on 19 December 2017.

In 1995 he was asked to become professor at the Plantin Society in Antwerp. 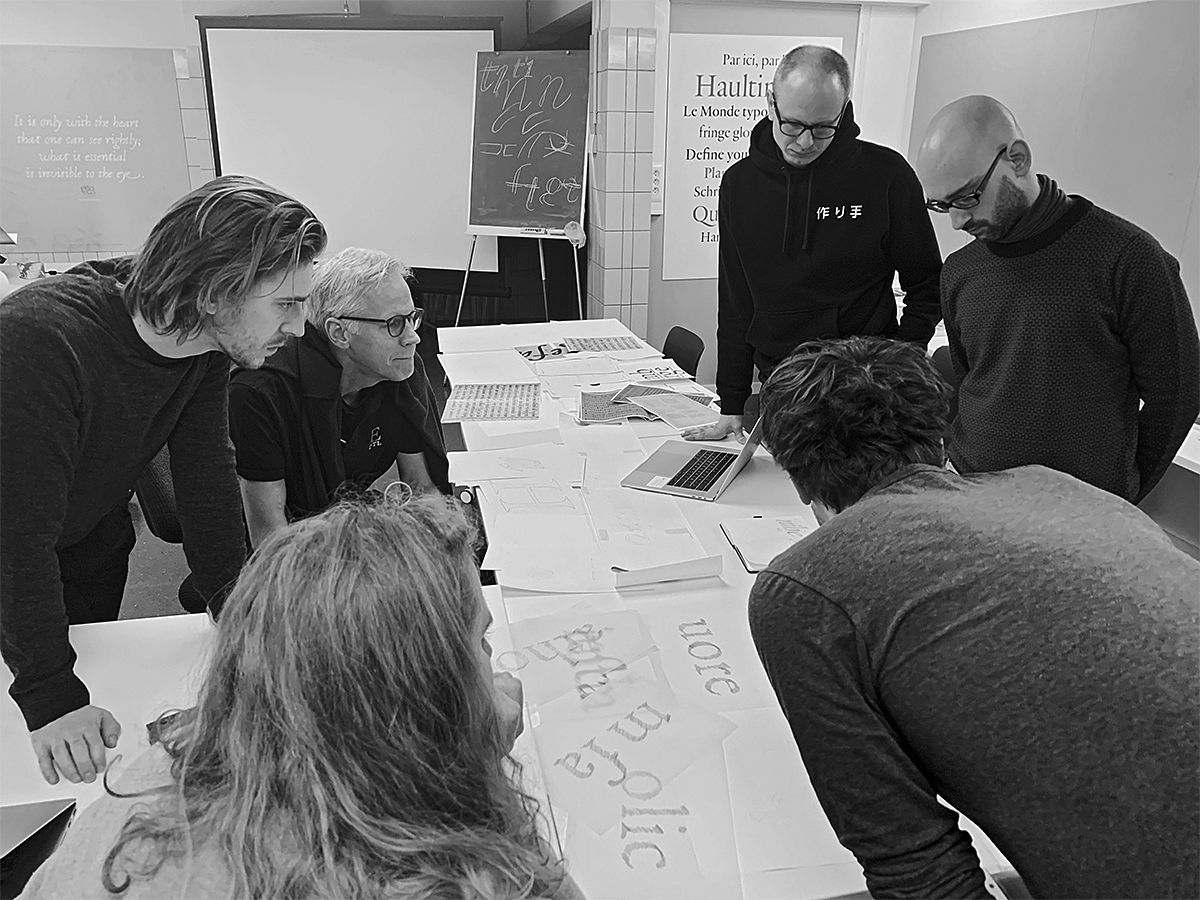 Blokland teaching at the Plantin Institute of Typography

Further he has lectured as a guest professor at institutes like the Technical University of Delft, the University of Reading, and Lahti Polytechnic University.

Jan van Krimpen’s 1950’s logo for the Plantin Society, digitized and redesigned by Blokland in 2011

Since 2019 Blokland is co-organizer and author of the program of the annual Typography Summer School at the University of Antwerp, which takes place under the umbrella of the university and the Plantin’s Institute of Typography. 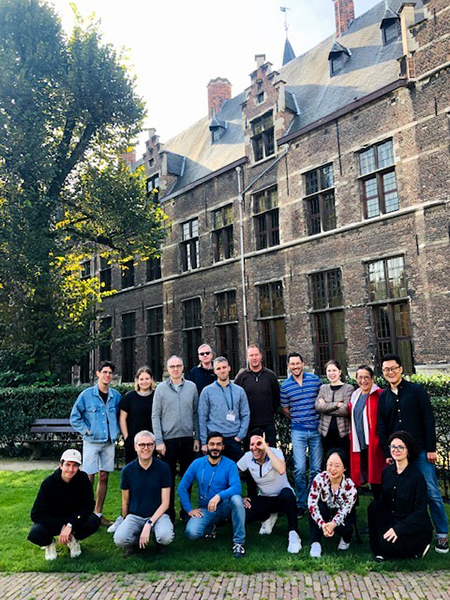 In 2004–2011 Blokland designed the lettering for the newly restored stained glass windows of the St. Peter’s Church in Leiden, the Netherlands. On YouTube a short ﬁlm (Dutch spoken) shows the restoration of the church, and the design and production of the lettering. 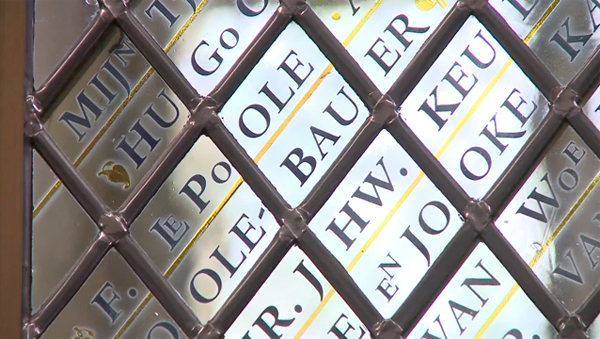 April 2013 Blokland designed the calligraphic lettering of H.M. Queen Beatrix’s Abdication Act. The letters on the act, in Humanistic Minuscule and Italic hands, with all their contextual letter-variants, were written by Blokland and transferred by himself into two digital fonts: Abdicatie Regular and Abdicatie Italic using the DTL FontMaster tools. The text was subsequently silkscreened on parchment. 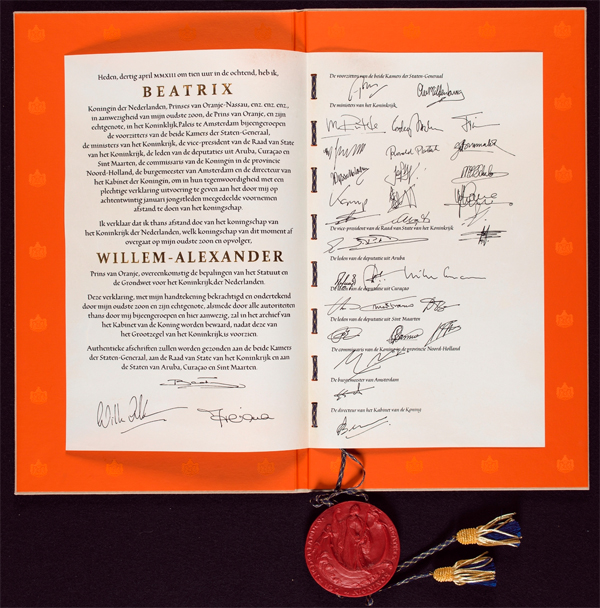 Silkscreened calligraphic lettering on the Abdication Act 2013, designed by Blokland 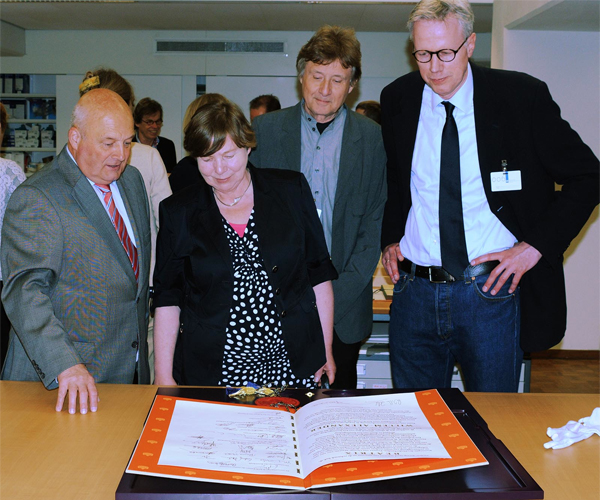 Summer 2016, as guest curator Blokland arranged the display of Renaissance type-foundry material (in relation to digital font technology) at the historical type foundry of the Museum Plantin-Moretus. He did this together with Kris Geysen, who is curator of printed material at the museum. 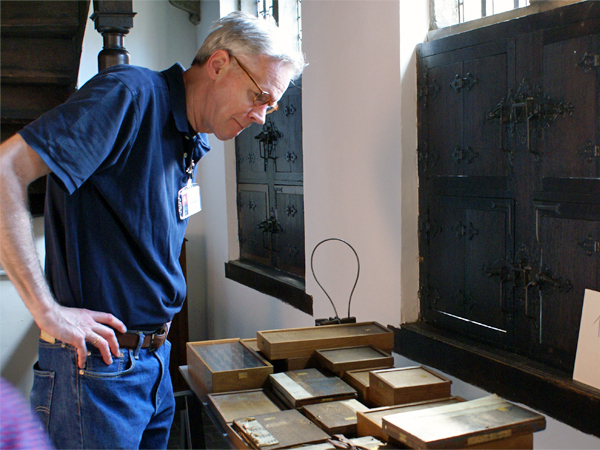 Frank E. Blokland organizing the display of type-foundry material at the Museum Plantin-Moretus 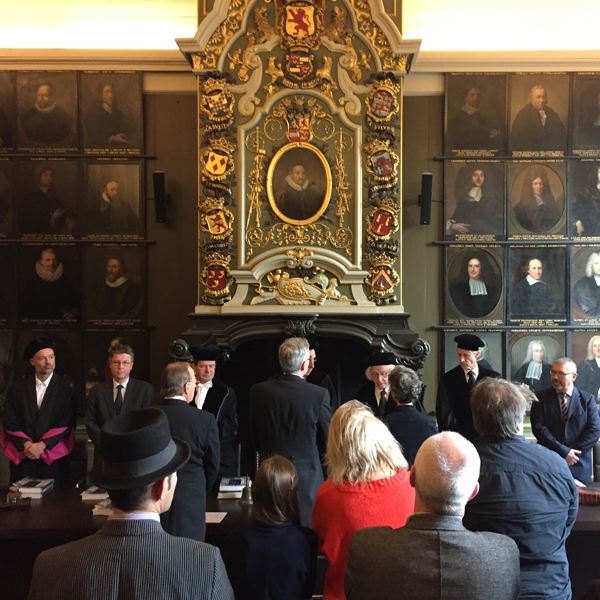 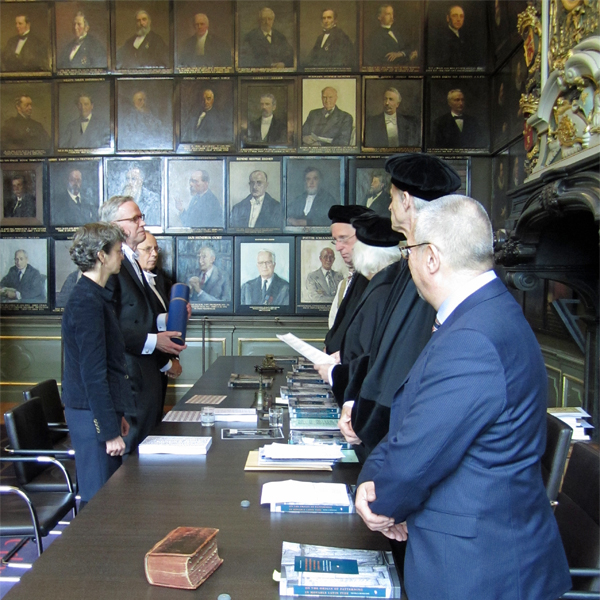 Dr. Frank E. Blokland in front of the Opposition Committee after receiving his diploma

Outcomes of this research have been translated a set of Python extensions for Glyphs and RoboFont, named LS Cadencer and LS Cadenculator, developed by type designer Lukas Schneider in cooperation with Blokland. These tools can be used for (batch) auto spacing and analysis, which is based on the intrinsic underlying patterning in roman and italic type. This software can be used to replace optical spacing completely or it can be applied supplementally to spacing by eye. 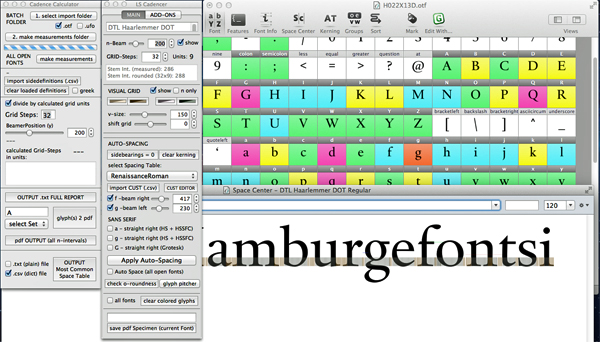 May 2018 the University of Split, Croatia, published Osnove oblikovanja pisma, a book on type-design fundamentals by Dr. Nikola Djurek and Blokland. On the one hand it combines elements of Blokland’s calligraphy course book from 1990 with his more recent research into the origins of the harmonics, patterns and dynamics in movable Latin type. On the other hand it contains information from Djurek’s PhD dissertation on the history of and conventions for Croatian diacritics with his ongoing research on the history of Croatian scripts (Glagolitic, Cyrillic, Latin). 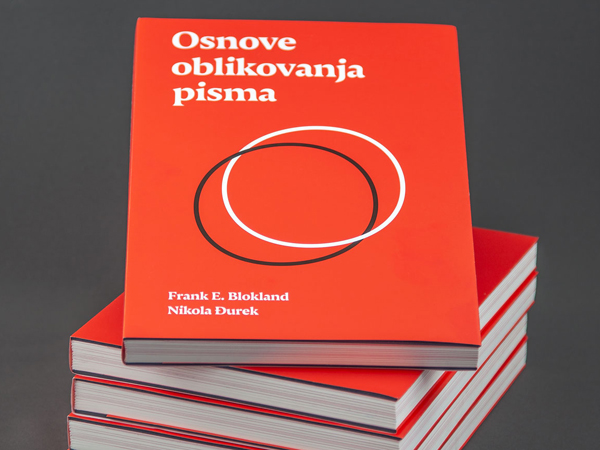 Early July 2019 Wim Crouwel received the Type Directors Club (TDC) Medal 2019 from Blokland at the award-winner’s studio in Amsterdam. This informal ceremony was recorded and shown at TDC’s annual awards presentation at The Rose Auditorium of The Cooper Union in New York City on July 17. 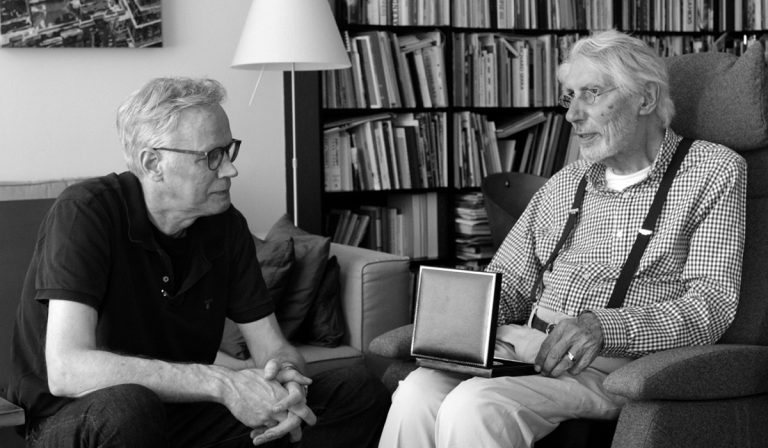